The word “vinegar” is acidic, (ox + vinegar), composed of the words “wine” and “sour”

As its name suggests, vinegar is a wine that has turned sour under the influence of certain bacteria.
However, even the producers, who knew how to control the brewing process, did not know what causes
acidification (the conversion of alcohol into acetic acid, which creates vinegar). This remained unclear
until 1964, by which time Pasteur had studied the role of enzymes and microorganisms. He discovered acetic fermentation was due to the bacterium Mycoderma aceti, which is carried by airborne dust. With the help of this bacterium and in the presence of oxygen in the air, alcohol is converted into acid.

As the acid fermentation continues, the bacteria multiply on the surface to form a thin white film, called “mother of vinegar”. The traditional method was mainly systematized in the Orleans region of France, hence its name. In 1880 the industry introduced the rapid oxidation method which greatly reduced the cost of its production. Vinegar is one of the main fragrances, but also a great preservative for meats, fish, fruits. 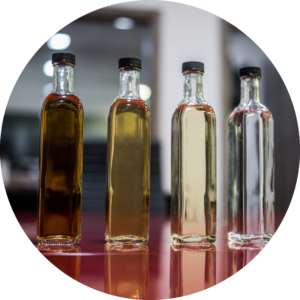